WARNING: Content may be sensitive for some readers.
“Est Alpha Kennels” in Pahrump, Nevada, is a puppy mill that has been in business for over ten years. They breed and sell a rare breed known as the Caucasian Shepherd Dog (or Caucasian Ovcharka). According to the AKC, these dogs weigh 99 to 170 pounds. They’re a devoted guardian breed that needs a family dedicated to training and socialization.
Since 2009, Oskana Higgins and Vasili Platunov, the owners of the breeding business, have been in and out of court for various reasons. They had way more dogs on their property than was legally allowed, and many of those dogs were ill, injured, or even dead because of neglectful care. Yet, even with the dogs being seized, the couple refuses to admit they’re in the wrong.
Facebook
Hundreds of Dogs Seized
In August 2022, authorities arrested Platunov and Higgins on animal abuse and neglect charges. They already had plenty of violations, including one for having hundreds of dogs on the property when they only had the zoning space for 30.
Throughout the years, many neighbors complained about odors and noises coming from the property. Neighbors and a mail carrier claimed they saw dead dogs in the trash on the property. Those accusations were only the beginning.
YouTube
RELATED: 10th “Horrible Hundred” Report Proves Puppy Mills Are Still Out Of Control
Nye County Sheriff’s Office (NCSO) obtained a search warrant, and when they arrived on the property, they were heartbroken. There were about 300 dogs in kennels, many with open wounds and maggots. Some dogs were even missing feet. All the adult dogs were severely emaciated, weighing about half as much as they should have.
At least 24 dead puppies were found in a freezer. A detective discovered that 90 of Plantunov’s dogs were disposed of at a nearby crematorium in only the past few months. Many young puppies were also euthanized due to parvovirus.
YouTube
Abusers Fight Back Despite Charges
Platunov and Higgins still have court dates to attend, but they’re not backing down. Platunov said he has been working with Caucasian Shepherd Dogs for over 40 years, so he calls all the allegations against him “fake.” Local rescues and shelters have taken the dogs into their care.
After the dogs were seized, Platunov filed a motion through his attorney asking for 40 of the dogs to return to his care. He said he had already sold and received payment for that many dogs, but he hadn’t delivered them yet. Platunov didn’t get the dogs back, and he and Higgins both pleaded “not guilty.”
RELATED: 13 Signs That A Puppy Is From A Puppy Mill
Facebook
The couple has many unpaid fines because of their puppy mill, so they filed for bankruptcy, which will stall the court proceedings for now. All the dogs are still in good hands at shelters and rescues. 25 dogs were seized earlier in the year and adopted out, but the hundreds that were recently rescued won’t be up for adoption until the court process is resolved.
If you’re looking for a new family member, please be careful where you get your dog. If you go to a breeder, make sure you can meet the parent dogs and see where they’re bred before bringing home a puppy.
Featured Image: YouTube
The post 300 Injured, Emaciated Dogs Seized As Puppy Mill Operators Deny Wrongdoing appeared first on iHeartDogs.com. 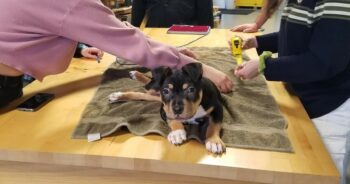 Shannon Ryan was scrolling on Facebook when she saw a request within a private group for volunteers and fosters of the rescue Pitties Love Peace. The rescue group was searching for someone to foster a 6-week-old pup named Jimmy. Shannon instantly said yes.  It didn’t matter that he couldn’t move his back legs and that nobody knew why. She didn’t care that he had to wear diapers. One look at his tiny, adorable face, and she was sold.  Jimmy first … Read more

The post Pet Insurance in Wisconsin appeared first on iHeartDogs.com.

The post Dug Up at Dogster: December 2022 Dog Events and Dog Holidays by Lauren Katims appeared first on Dogster. Copying over entire articles infringes on copyright laws. You may not be aware of it, but all of these articles were assigned, contracted and paid for, so they aren’t considered public domain. However, we appreciate that you like the article and would love it if you continued sharing just the first paragraph of an article, then linking out to the rest of the piece on Dogster.com.

Dogster is a publication where dog lovers come together to get the latest expert advice about dog behavior, health, news and entertainment.

The post Dug Up at Dogster: December 2022 Dog Events and Dog Holidays by Lauren Katims appeared first on Dogster. Copying over entire articles infringes on copyright laws. You may not be aware of it, but all of these articles were assigned, contracted and paid for, so they aren’t considered public domain. However, we appreciate that you like the article and would love it if you continued sharing just the first paragraph of an article, then linking out to the rest of the piece on Dogster.com.