“We don’t deserve dogs” isn’t just something humans say; fellow dogs might be thinking it too. One puppy named Soh was especially grateful when his canine brother named Hand saved him from drowning. Video footage shows Soh struggling to pull himself out of a fish pond while Hand runs over to save the day.
It’s heartwarming to see two canine siblings supporting each other, but not everyone was moved by the video. Some people are questioning how the video was filmed and why no humans jumped in before Hand did.
screenshot, uk.news.yahoo.com
Heroic Dog Doesn’t Hesitate
In the video, Soh is clinging to the edge of a fish pond in Lopburi, Thailand, struggling to climb out. He slips and falls in a few times before Hand comes trotting over after hearing his brother in danger.
Hand reaches for Soh’s collar to pull him out, but at first, Soh resists. Then, he finally lets his brother drag him onto dry land, where the two can resume their usual wrestling. A separate video shows them running around playfully in their yard after the incident.
According to a study from Messerli Research Institute at the University of Veterinary Medicine Vienna, dogs are most likely to perform unselfish acts toward each other if they’re close.
screenshot, uk.news.yahoo.com
“Dogs truly behave prosocially toward other dogs,” the study said. “That had never been experimentally demonstrated before. What we also found was that the degree of familiarity among the dogs further influenced this behavior. Prosocial behavior was exhibited less frequently toward unfamiliar dogs than toward familiar ones.”
Was it Staged?
However, people are often skeptical of animal rescue videos because they wonder who’s recording and why they aren’t helping. In this video, the camera shifts to focus on the dogs, so people wonder why the person filming didn’t save Soh. Yet, based on the angle of the camera, it was likely edited security footage rather than someone witnessing it. If not, it’s cruel to just sit and watch an animal suffer for a video.
screenshot, uk.news.yahoo.com
RELATED: Experts Suspect That Man Faked Dog Train Tracks Rescue For Fame
Sadly, it’s not unheard of for people to fake rescue videos for publicity. Luckily, this video doesn’t seem to be one of them, so it’s just footage of Hand showing off his selfless actions. Sometimes, dogs save lives when we don’t expect them to, proving that our lives aren’t complete without them.
Watch the Video Here:

Surveillance footage captured the moment a heroic dog in Lopburi, Thailand, sprang into action to rescue a fellow puppy that was stuck inside a pond in their human’s yard pic.twitter.com/Rq5zwsNW7J
— NowThis (@nowthisnews) August 17, 2022

Featured Image: screenshot, uk.news.yahoo.com
The post Did Humans Put This Drowning Puppy At Risk For The Sake Of A Viral Video? appeared first on iHeartDogs.com.

The post Why Is My Dog Shaking? by Arden Moore appeared first on Dogster. Copying over entire articles infringes on copyright laws. You may not be aware of it, but all of these articles were assigned, contracted and paid for, so they aren’t considered public domain. However, we appreciate that you like the article and would love it if you continued sharing just the first paragraph of an article, then linking out to the rest of the piece on Dogster.com.

Our experts identify causes and solutions to dog tremors due to behavioral, medical and environmental reasons.

The post Why Is My Dog Shaking? by Arden Moore appeared first on Dogster. Copying over entire articles infringes on copyright laws. You may not be aware of it, but all of these articles were assigned, contracted and paid for, so they aren’t considered public domain. However, we appreciate that you like the article and would love it if you continued sharing just the first paragraph of an article, then linking out to the rest of the piece on Dogster.com. 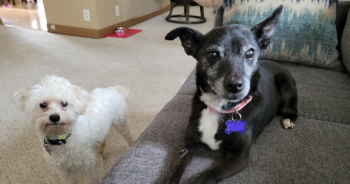 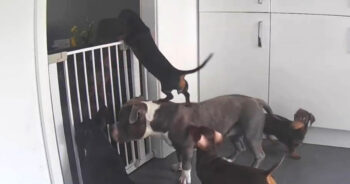 Do you have a dog that’s too smart for their own good? One who often commits acts of mischievous brilliance that leave you scratching your head? Then you can relate to the Warwick family’s woes when it comes to containing wily wiener dog Darcie! The trouble with Darcie began when her mom, Mary, would come home from work to find Darcie waiting in the window to greet her. A cute welcome for sure, but Darcie was supposed to be in … Read more