Our canine companions are capable of learning all kinds of commands. This includes everything from those that help out their humans to learning tons of tricks. But one incredibly talented black Labrador from England surprised an entire shoreline when he showed off his unexpected surfing skills.
A video of him catching a wave was shared to Facebook and already has thousands of views and hundreds of comments.
Facebook
Fistral Beach visitors were treated to more than just the picturesque views of the sea on a recent Saturday afternoon. Beachgoers were glued to the delightful sight of a Black Lab and his doggy dad as they spent their afternoon surfing in the Cornish Sea. Lucky for us and internet users all over the world, another beach visitor was able to capture the impressive scene.
Facebook
The video starts out with the beautiful Black Lab sitting still on the back of his surfboard. A man behind him on his own board stares in disbelief as the pup catches a wave and seems to effortlessly sail to shore. In the background, a human surfer even falls right off his board while the Lab glides on by and makes his way towards the sand. Beachgoers all along the shore were captivated by the canine and didn’t hesitate to chime in on what they thought.
“I can definitely say he was better than a lot of human surfers I’ve seen! I’m a huge dog lover so I sat and watched the doggie and his owner for ages – as it was loving every minute,” said Kerryn Groves, the videographer.
How did they do it?
Kerryn explained that she saw the Lab’s dad retrieve the surfboard and take it out to sea as his canine companion swam behind him. Once they were where they needed to be, they waited for the perfect moment together, and then the Lab jumped on board and caught a wave back to shore.
“Surfing was definitely something the dog’s owner had taught him and they look like they do it a lot,” Kerryn added.
Facebook
As the Lab gets closer to the shore, he looks back towards the sea, and it’s almost as if he’s checking whether or not his doggie dad sees his success. Then, once he hops off his board and prances in the shallow water, his dad runs into the frame and they enthusiastically greet one another. A celebration is in order after such an incredible job!
You can check out the full video of one of his many rides to shore, below.

Featured Image: Facebook
The post Black Lab Stuns Spectators As He Catches A Wave And Surfs To Shore appeared first on iHeartDogs.com.

With hunting season right around the bend, it’s time to make sure that your dog is safe on their walks. If you’re like me, and you know Hunting season starts in September, you might now be wondering how to keep your dog safe on these walks, well luckily, since moving to the US, this is […]

Escape proof harnesses, you have a houndini too, huh? Finding a no-escape harness can be tough, but I’ve done all the leg work for you in this best harness list. Your dog ducks their head and reverses, and suddenly that harness is gone, and they’re prancing through the park, and cue the panic. That panic […] 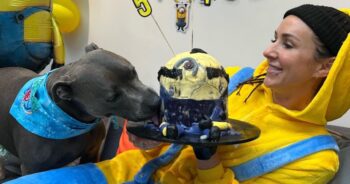 When the time of year rolls around that our furry family members were born or rescued from the shelter, some pet parents really want to go all out to celebrate.  After all, what would life be like without the furry loves of our lives? Recently, one doggie mama threw a Minion-themed birthday bash for her baby boy, and the video she posted is going viral. It’s obvious by the recent video clip posted by Tik Tok user @Hannahwantsdj that she … Read more

The post Dog Mom Goes All Out To Throw Her Pup A Minion-Themed Birthday Bash appeared first on iHeartDogs.com.

The post What You Should Know About Trazodone for Dogs by Arden Moore appeared first on Dogster. Copying over entire articles infringes on copyright laws. You may not be aware of it, but all of these articles were assigned, contracted and paid for, so they aren’t considered public domain. However, we appreciate that you like the article and would love it if you continued sharing just the first paragraph of an article, then linking out to the rest of the piece on Dogster.com.

Trazodone is rising up the ranks as veterinarians’ go-to medication to help dogs of all ages and breeds contend with behavioral issues, including anxiety, noise phobias and stress. This antidepressant is regarded as a relatively safe and effective medication to tone down worried and frightened dogs and cats. What is trazodone for dogs? In technical …

What You Should Know About Trazodone for Dogs Read More »

The post What You Should Know About Trazodone for Dogs by Arden Moore appeared first on Dogster. Copying over entire articles infringes on copyright laws. You may not be aware of it, but all of these articles were assigned, contracted and paid for, so they aren’t considered public domain. However, we appreciate that you like the article and would love it if you continued sharing just the first paragraph of an article, then linking out to the rest of the piece on Dogster.com.