It’s easy to understand why dogs are so often referred to as “man’s best friend.” They provide unconditional love, close companionship and can even be trained for a job. But for some people, dogs have an even greater impact.
This can certainly be said about Leon Kirby-Bulner, a little boy with special needs whose life has been completely changed thanks to a sweet Cocker Spaniel named Fern.
Facebook
It was obvious from birth that Leon was unlike other children. Nicknamed “Mancub” after Mowgli from The Jungle Book, Leon struggled to eat and sleep. He spent most of his waking hours unsettled and screaming.
He would gag and choke every time he tried to eat and, as a result, was fitted with a nasogastric tube for feeding. But after two long years, many doctor visits, and multiple kinds of tests, Mancub’s family was finally finding answers.
He was diagnosed with Chiari malformation, a rare condition where structural defects in the base of the skull cause brain tissue to extend into the spinal canal. This happens when part of the skull is either misshapen or smaller than normal.
Facebook
This condition can cause severe headaches, problems with balance, dizziness, and difficulty swallowing. He was also diagnosed with autism, a neurological disorder that affects how people interact with others, communicate, learn, and behave.
Both of these conditions explain why Mancub was constantly screaming and not at all interested in interacting with his family.
Facebook
“He didn’t speak and it was almost as if he was in his own little world,” explained Mancub’s mom, Hayley.
Then, Mancub’s family went to meet a Cocker Spaniel. Together, they run a falconry business and wanted a dog to help with some flushing work alongside their hawks. But when they arrived, an adorable bundle of joy jumped out of her pen and snuggled up with Mancub’s mom. The tiny Cocker Spaniel puppy instantly won her heart. They decided to call her Fern.
When they took her home to meet Mancub, they certainly weren’t expecting what happened next. The once impassive child suddenly lit up and showed emotions like he never had before. Mancub even began to interact with the pup and wanted to play.
Then, in the weeks that followed, he really started coming out of his shell. His parents were thrilled and had no idea this shift could happen because of him bonding with a dog.
“I never imagined a dog could turn our lives around the way in which Fern has and even Mancub’s doctors are in awe of the progress that he has made with Fern at his side,” said Hayley.
Facebook
Now, the pair are inseparable. The family sent Fern to training to become an official assistance dog. They may have lost their “falconry working dog,” but it was worth it for all the benefits she brings Mancub.
They do everything together, and Fern even helps Mancub with tiny tasks like bringing him his clothes in the morning and fetching his feeding pump. She also provides behavior disruption when Mancub is distressed, helps stabilize him if he loses his balance, and alerts Mancub’s mom when he’s getting a painful headache.
Facebook
Fern’s help has become invaluable, and the duo loves to go on adventures together.
If you can’t get enough of this adorable pair, you can follow their journey on their Facebook page. There, Mancub’s mom makes posts to help show other families the changes a dog can inspire and fundraises to help purchase and train dogs for other autistic children.
Featured Image: Facebook
The post Sweet Cocker Spaniel Is Life-Changing For A Child With Special Needs appeared first on iHeartDogs.com.

What things can dogs smell that humans can’t? Those super snoopers pick up just about every scent there could possibly be as canine noses are built for superior sniffing. Especially when compared to human olfactory senses. We’re pretty much nose blind next to our dogs. According to the American Kennel Club, “Depending on the breed, dogs have up 100 million or more scent receptors in their noses. And those terrific trackers we know as Bloodhounds have 300 million!” That means … Read more 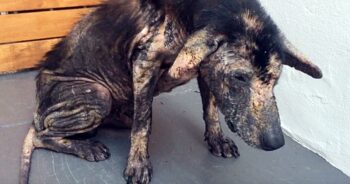 Dog trackers are a modern luxury, and Jiobit definitely falls into this category. There has been a huge surge of GPS pet trackers on the market, Jiobit is one of those on the market. and it’s really hard to find something that actually reflects the experience and has been actually tested by real dogs – […] 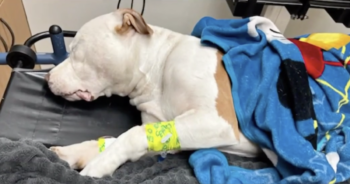 A family in Miami, Florida, never would’ve expected a landlord dispute to lead to their dog’s death. According to a 14-year-old girl and her aunt, Dunia Mota, it all started when the landlord came to the home with an eviction notice. The teenager was home with her Pit Bull named Chaos. Chaos barked when he heard the landlord outside, and for some reason, that prompted the landlord to call the police. When the police arrived, they didn’t ask for details … Read more 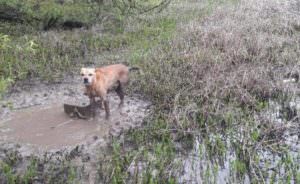 Park Rangers outside of Kansas City, Missouri made a shocking and heartbreaking discovery at Longview Lake on Friday. A terrified, mud-caked dog – since named Deputy by his rescuers – had been chained to a 12″ x 12″ concrete masonry block and presumably left to drown as the waters rose. He is now recovering at the Great Plains SPCA in Independence, MO where staff describes him as a “loving, happy dog.” Park rangers heard Deputy’s cries and began investigating the … Read more

The post UPDATE: Dog Found Chained To A Cinder Block & Left To Drown Has Been Adopted! appeared first on iHeartDogs.com.