There is a lot of cruelty in this world and even though this story starts off in a sad manner, we PROMISE that you’ll be cheering by the end of watching the video! Please be sure to ‘SHARE’ it with a friend or family member because you will make their day and restore faith that there are so many caring people still in this world.

Bret Winingar and his son Zach were riding their dirt bikes along the rural outskirts of Little Rock when they discovered a crate hidden in the weeds. As they got closer, they saw that the top of the box had been chewed off. They knew something was wrong when they saw this, so they immediately attempted to pry open the container.


The pair was shocked to discover a severely emaciated dog rotting in the corner of the container. Her body was covered with bleeding wounds, which had formed from open sores she’d endured for weeks in the cage.


The dog was named Charlie Bravo, and she received whatever food and water the kids had. They ran home as fast as they could, bringing a vehicle to pull the dog away. It was decided that the dog Charlie was in extreme shock due to hunger and claustrophobia. She couldn’t even walk because of her poor condition, but the Winingars assured her they’d look after her.


Charlie made a slow but steady recovery with Bret’s family over the following several days. The family initially intended to foster her until she was healthy, but it became clear that they would be unable to do so. As a result, Charlie became the fourth rescue dog in her new home.

Charlie’s interest in bicycles grew as she got better. After all, the men who saved her were bikers. Bret one day decided to build a crate for Charlie on his bike and invited her to come along. The overwhelmed girl immediately climbed on, and there has been no turning back since then.

Charlie has now grown into a ‘free-spirited’ adventurer. Charlie is a true example to anybody trying to break away from a bad situation in life, as she did when she turned her life around.

Are you ready to CHEER? Well, you will when you see Charlie’s life completely turn around!

Watch this incredible story in the video below. Be sure to pass on the SMILE to a friend or family member!

Please ‘SHARE’ this story with a friend or family member!
The post Biker Sees ‘Chewed Up’ Crate In Rural Wilderness, His Heart Sunk As He Opened It appeared first on iHeartDogs.com. 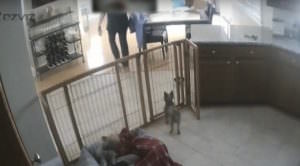 If you want your relationship with your dog to grow, try looking for new ways that you can connect with your pup on a deeper level. This could include trying new activities together, making changes to your daily routine, or learning to better understand their non-verbal communication. To help you get started, we’ve put together […]

The post 5 Ways to Strengthen Your Relationship with Your Dog appeared first on Freshpet.

Dog trackers are one of the perks of modern dog ownership – but how does the Apple AirTag stack up? As always, I’ve been testing out the Apple Airtag in order to give you guys the best insight into these products that I possibly can. So, for the last 9 months or so, I’ve been […]
More and more cats are now traveling with their families, and that’s purr-fect! If you’re a planning a road trip from the U.S. to Canada with your cat, we’ve gathered all the… 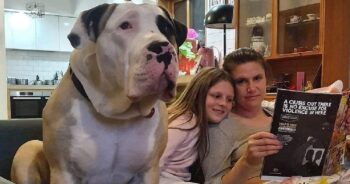 It’s not surprising that the photos of an enormous dog and his two younger sisters have recently gone viral. The gentle giant towers over his family in the images, which have already amassed thousands of likes.  For some, the photos are quite comical. To others, they’re completely unbelievable. Some people are even speculating whether or not he’s actually a dog or if something so large and loveable could even be real! Meet Barney The Boerboel While it may be hard … Read more

One of Winter the Border Collie’s favorite things on a hot summer day was to splash around and play in a water-filled baby pool in his backyard. But, on the very day his parents shot footage of Winter enjoying the water, the dog passed away. He didn’t die in a way you may expect. It wasn’t from heat stroke or drowning. The young, energetic, 18-month-old pup died from a condition called water intoxication. What Happened To Winter? It was officially … Read more