After only a few days, a Shih Tzu named Parker is unrecognizable. When rescuers found her, she was severely matted to the point where it was unclear what kind of dog she was. It looked like someone had neglected her for years and then tossed her over the fence of a local animal rescue.
Veterinarians say that Parker is one of the most extreme neglect cases they’ve ever seen. She might have never had a loving home before, so the rescue is determined to help her find one. In the meantime, they’re also hoping to locate her abuser.
Instagram
Years Without Love
A volunteer in Florida found Parker next to the fence around Tri-County Animal Rescue. The gate to the fenced-in area was still securely locked, so officials suspect that someone tossed the 6-year-old Shih Tzu over the fence and abandoned her there.
Sadly, being thrown and abandoned were only the beginning of Parker’s problems. The poor pup looked like she had been neglected for years due to her dense matting, irritated skin, and inability to walk. She could barely even stand on her own.
Instagram
“[It was] one of the worst neglect issues that I have ever seen an animal present,” said veterinarian Dr. Lindsey Naimoli. “This is a product of just numerous years of neglect and abuse living in a deplorable facility.”
Parker didn’t have a collar or microchip when the volunteer found her. So, the person who dumped her was likely trying to intentionally get rid of her, but no dog deserves to be disposed of. The rescue’s staff members are going to make sure Parker feels nothing but love from now on.
Instagram
Parker’s Second Chance
It took five staff members over two hours to shave off Parker’s matted hair. While doing so, the staff members realized that her hair was infested with maggots. She had mammary tumors, and she needed emergency surgery. Also, her eyes were forced open by the dense matting, and one of her eyes never fully formed.
The staff consistently reassured Parker that everything would be okay as they cleaned her and provided necessary treatment. She is now on the road to recovery. The rescue had no idea if she’d make it through the first night, but she’s still staying strong, thanks to the many people who are helping her.
Instagram
“You never want to think that a human being could do this to an animal,” Naimoli said. “To see it done, this has been many years of neglect. This person has got to be detained.”
Police officers haven’t located the person responsible for Parker’s abandonment and neglect yet. If you have any information about the situation, please contact Crime Stoppers of Palm Beach County at 1-800-458-8477. 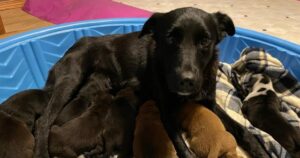 When Lexi Johnson, a volunteer foster for Ruff Start Rescue, was presented with the opportunity to take in pregnant pup Poppy, she was thrilled. As a dog lover, and as someone who studied animal behavior, she had always wanted to foster a pregnant mama dog. Her heart was bursting, and she excitedly shared the news with her friends and family. Then, about one week after she came to live with Lexi, the beautiful Lab Mix birthed ten healthy puppies. Lexi … Read more

The post Mama Dog Who Lost Her Litter Is A Miracle For Ten Orphaned Puppies appeared first on iHeartDogs.com.

The Embark Urban Harness is another choice of harness your dog has to choose from for your every day walks and exercise! As a two point harness, with a y-shape, this one definitely falls within my remit of reviews, huh? Embark reached out to me about this, I was pretty excited to get my paws […]
Father’s Day is right around the corner so we have to celebrate our Dog Dad’s duly too, right? All the playful nights, the trips together, and the food that they provide is a big deal. And let’s be honest, your dog is your baby so it’s only fair. Let’s look at some ways to show […] 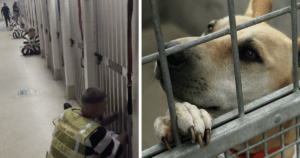 There’s nothing like the joy a new puppy brings! But bringing home a new dog is about more than snuggles and play time. It’s your responsibility as a pet owner to make sure your house is equipped to handle a curious puppy. From the house to the yard to being out and about, here are …