Some humans spend a lot of time making sure they have perfectly shaped eyebrows. However, for Betty the rescue dog, her beautiful eyebrows aren’t high-maintenance at all. At first glance, they might appear fake, but she was actually born that way. Sadly, she was rejected by her first parents due to her unusual appearance, but she has grown so much since then and she’s embraced her beautiful coloring.
When she was only five months old, Betty was found wandering the streets on a cold winter day in Bratsk, Russia. A local shelter took her in to save her from the cold. When they first saw her human-like eyebrows, they couldn’t believe their eyes. They had never seen anything like it before.
Image: Screenshot, Viral Press YouTube
The shelter employees tried to wash the eyebrows off, but as it turned out, they were just a part of Betty’s fur coloring. A vet decided that she must be part Husky because the eyebrows were a sign of that lineage.
Betty quickly gained popularity for her unique look. The shelter fell in love with her, and they knew that her unique feature didn’t hold her back from being a happy and healthy pup.
Image: Screenshot, msn.com
A Home for Betty
The shelter posted photos of Betty online to help her gain some attention. These adorable photos caught Oksana Maymsina’s eyes right away, and she knew that she had to adopt this sweet puppy. Betty only had to spend a total of 5 days in the shelter thanks to her generous new mom.
At the shelter, Betty was initially named Frida after Frida Kahlo, an artist who also had very distinct eyebrows. However, Masymsina felt that the name Betty suited her better.
Betty has quickly adjusted to her new home, and she is happy to have finally found a loving family. She already knows some basic commands, and she has been getting along well with her new cat sibling.
Image: Screenshot, msn.com
“I am the happiest [parent] of the coolest dog ever. She even knows two commands: sit and come here,” said Maymsina. “I got a bunch of toys for her. She sleeps on the bed.”
The vets have said that the eyebrows are similar to a birthmark. This means that they will likely fade over the years, but they will never fully disappear.
Maymsina is very proud of Betty’s unique appearance, and she loves sharing photos of her beautiful dog. Betty is so happy to have finally found a mom that loves her, and she is glad that she will never be left alone on the cold streets again. In early May 2022, a flight of 166 Ukrainian refugees landed at the St. John’s International Airport in Canada. But they weren’t alone because 11 pets (3 dogs and eight cats) came along. The people couldn’t leave their furry friends behind, so they didn’t hop on a flight until they knew their pets could join them. The Ukrainians and their pets have been welcomed with open arms in Newfoundland and Labrador, and many other Ukrainian pet parents are hoping to … Read more

The post Ukraine Refugee Pets And Their Humans Seek Shelter Thousands Of Miles Away appeared first on iHeartDogs.com. On Monday, firefighters in Yucca Valley, California, responded to a distress call of two puppies trapped inside a tortoise den. For those of us who are unfamiliar with these archaic desert creatures, tortoises dig their burrows in the dirt and sand. And while generally shallow, they can occasionally tunnel upwards of thirty feet in length. One such burrow that exists just outside of a Yucca Valley home is occupied by a one-hundred-pound tortoise named Oscar. This particular tortoise is looked … Read more A tiny, defenseless puppy was observed sleeping on a porch. He was so distressed that he wasn’t moving. Fortunately, a rescuer was alerted and when she got to the little pup, she could tell he was severely hurt. The house’s porch belonged to an abandoned property. Where did the tiny little pup originate?   Image Source/Story Credit: TheDodo – Facebook Video     The rescuer searched for his mother just in case she needed help too. But his mama was … Read more

The post Wounded And Alone, Puppy Climbed Onto Abandoned Porch, ‘Dreamt’ Of His Angels appeared first on iHeartDogs.com. 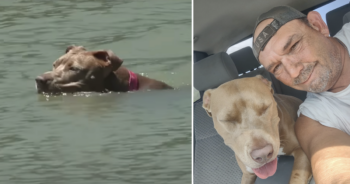 A Pit Bull known as “Monster” isn’t as scary as she sounds. She’s a sweetheart who loves being near the water, especially when it’s with her human, Kieth Soffes. Monster loves going on daily trips out of San Leon, Texas, on her human’s shrimp boat. However, even the strongest swimmers can get into trouble at times. One day, Monster fell off the boat when Soffes wasn’t paying attention. He had no idea where his dog was for five days, but … Read more

The post How to Teach a Dog to Speak by Sassafras Lowrey appeared first on Dogster. Copying over entire articles infringes on copyright laws. You may not be aware of it, but all of these articles were assigned, contracted and paid for, so they aren’t considered public domain. However, we appreciate that you like the article and would love it if you continued sharing just the first paragraph of an article, then linking out to the rest of the piece on Dogster.com.

Teaching your dog to speak in six steps is a fun trick that dogs of all ages and training levels can learn.

The post How to Teach a Dog to Speak by Sassafras Lowrey appeared first on Dogster. Copying over entire articles infringes on copyright laws. You may not be aware of it, but all of these articles were assigned, contracted and paid for, so they aren’t considered public domain. However, we appreciate that you like the article and would love it if you continued sharing just the first paragraph of an article, then linking out to the rest of the piece on Dogster.com.