In early May 2022, a flight of 166 Ukrainian refugees landed at the St. John’s International Airport in Canada. But they weren’t alone because 11 pets (3 dogs and eight cats) came along. The people couldn’t leave their furry friends behind, so they didn’t hop on a flight until they knew their pets could join them.
The Ukrainians and their pets have been welcomed with open arms in Newfoundland and Labrador, and many other Ukrainian pet parents are hoping to make the journey there too. Here are the stories of the pets’ adventures.
Facebook
Local Welcomes Stranger and Pets to Her Home
Hanna Sukhinets made a long, complicated journey with her cat named Margo and her medium-sized dog named Dea. The trio fled from Ukraine to Newfoundland and Labrador by taking a train, then a bus, and finally, the plane. Sadly, her husband and their older dog are still in Ukraine.
Sukhinets quickly fell in love with Newfoundland and Labrador. As a dog lover, she couldn’t resist a place with the names of two dog breeds. But also, she could tell it was a place where she and her furry friends could feel safe. So, she turned to social media to see if she could find a place to stay once her plane arrived.
RELATED: Fleeing Ukrainians Struggle To Cross U.S. Border With Their Dogs
Facebook
Lori Best, who lives near St. John’s, saw the post and offered a space in her home. Even though Best and Sukhinets were strangers when they first connected, they soon felt like family after communicating for a while. When they finally met at the airport, they were both very emotional.
“When I saw the big dog carrier, I knew it was her and I started running towards her and gave her a great big hug and had some tears,” said Best.
Sukhinets is grateful that she and two of her pets were able to make it to safety. She said she couldn’t imagine leaving them behind. However, she’s still worried about her husband and other dog, who haven’t left Ukraine.
Facebook
Cats Leave Ukraine for the First Time
Two felines named Bella and Simba were on the same flight as Sukhinets and her pets. Their humans, Olga and Ivan Antoniuk, owned a real estate company in Ukraine, but business stopped when the Russian invasion began, so they decided to leave.
13-year-old Bella had never left her apartment in Ukraine, so traveling with her wasn’t easy. She’s a skittish cat with kidney disease, and because of her age and condition, she couldn’t take anti-anxiety medication as Simba could. Leaving Ukraine meant a lot of stress for the elderly cat, and the family needed to pack lots of special cat food.
RELATED: Man & Dog Walk 140 Miles To Safety Across Russian-Occupied Ukraine
Facebook
Yet, Olga and Ivan knew that leaving Ukraine was the best option for all of them. So, they drove to Poland before hopping on the flight to St. John’s. After lots of litter box stops on the way, they made it to the airport and flew to Newfoundland and Labrador with the two cats.
“I think it’s so crazy. The free chartered flight, free hotel here, free food here for us, and free food for my cats,” Olga said. “I [can’t] describe this kindness for us and for our pets.”
Many people welcomed the couple and their cats when the plane landed. Olga and Ivan were in shock but very grateful for everyone’s kindness.
RELATED: Polish Rescuers Run In And Out Of War-Torn Ukraine Saving Animals
Facebook
More Ukrainians Plan to Fly There
People in Newfoundland and Labrador continue to host Ukrainians and their pets by helping them catch flights and find places to stay. There’s even a Facebook group to organize these travels.
Many other pet parents have posted in the Facebook group, expressing interest in coming to Canada from Ukraine. It’s heartwarming to see how many families are refusing to leave their pets behind and how many strangers are willing to help improve these people’s lives.
Featured Image: Facebook
The post Ukraine Refugee Pets And Their Humans Seek Shelter Thousands Of Miles Away appeared first on iHeartDogs.com. 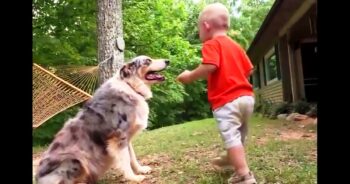 In their Tennessee home, Bryan and Alicia Holloway would frequently let their 18-month-old son, Bryson, play with their family dog in the yard. The Holloways were certain that their child was secure with Shiloh, their bright Australian Shepherd puppy.   Image/Story Source Credit: Inside Edition/YouTube   When the parents discovered Shiloh lunging at Bryson while playing in the yard one day, they became concerned. For a second, the Holloways had their doubts about Shiloh’s intentions. But then they noticed a … Read more

The post Dug Up at Dogster: June 2022 Dog Events and Dog Holidays by Lauren Katims appeared first on Dogster. Copying over entire articles infringes on copyright laws. You may not be aware of it, but all of these articles were assigned, contracted and paid for, so they aren’t considered public domain. However, we appreciate that you like the article and would love it if you continued sharing just the first paragraph of an article, then linking out to the rest of the piece on Dogster.com.

School’s out for summer, and that means more quality time outside with your pup. Even if you don’t have any vacation time to spare, you’re in luck: This month’s dog holidays include Take Your Dog to Work Day and Take Your Pet to Work Week. Check out the rest of the June dog holidays and …

The post Dug Up at Dogster: June 2022 Dog Events and Dog Holidays by Lauren Katims appeared first on Dogster. Copying over entire articles infringes on copyright laws. You may not be aware of it, but all of these articles were assigned, contracted and paid for, so they aren’t considered public domain. However, we appreciate that you like the article and would love it if you continued sharing just the first paragraph of an article, then linking out to the rest of the piece on Dogster.com.